You are here: Home / BLOG / beavers

This year we are going to expand the availability of holiday accommodation at Bamff to include a second holiday self catering cottage, the Bamff Lodge, which will be known as the “Beaver Lodge” as it is within yards of what are probably the UK’s best beaver wetlands!
Above two beaver-made pools on the Cateran Trail we are building a beaver hide   “The Bamff Hideaway”. In recognition of the nocturnal habits of beavers and other wildlife, there will be a double bed, which will make this a wonderful “glamping” destination – off the beaten path with wood burning stove and no electricity – it will offer exceptional access for wildlife watchers and photographers.

We will also add 2 beautiful yurts on the campsite at the back of the castle in the spring.Each with their own stove, they will be available for short breaks or longer stays. Washing and extra cooking/ eating  facilities will be available within the castle’s Garden Room, as well as a campfire and barbecue out of doors for use in good weather.

Ecotours will also be on offer, as usual but more so!  Watch this space! 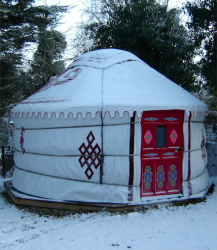 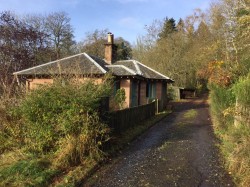 I just got back from watching the beavers.  There were two of them out, an adult and a kit, grazing next to the pool, very relaxed, munching away on grass and other plants, sweet teddybearish expressions clearly visible through the binoculars.  As I headed home a vivid raspberry pink sunset was reflected in the still beaver pool behind the trees.  I was thinking about the remarkable week-end we had, when for once we were privileged to see, of all extraordinary things, the interior landscape of a living beaver.

BBC’s One Show comes to film the beavers

Roisin Campbell-Palmer of Royal Zoological Society of Scotland along with Helen Dickinson, Beaver Officer of the Tayside Beaver Study Group managed to successfully trap two of our beavers for the official monitoring programme, and then an operation, carried out by zoo vet Romaine Pizzi took place in our shed. Saturday’s one was also filmed by a film crew from BBC’s The One Show, making a programme about the health screening of the Tay beavers.

Imagine the scene, our cluttered woodchip shed containing assorted tools, cheap uplighters and other people’s beds, along with an set of metres relating to the wind turbine. In the foreground there is an array of screens and monitors around the operating table, and from time to time there is a the bleeping of a heartbeat. A surgeon is there and his nurse in green gowns and all this surrounded by people with TV cameras and huge fluffy microphones.   You could almost be on the set of Holby city except that the patient that is anaesthetised on the table in the middle of all this is not a human, but a beaver, its unmistakeable flat scaly tail attached to the end of its flat out dark brown hairy form, and of all things, its feet and tail wrapped in tinfoil to keep it warm.   Holby City meets The Lion the Witch and the Wardrobe, perhaps.

Romaine the celebrity vet, on Saturday, when the film crew were there, talked us through the whole procedure.  Various checks were carried out but the main event was the laproscopy.  A small area of the abdomen was shaved, an incision made and a tube was fed in to examine the inside of the animal with the main purpose of checking to see if it had any sign of a parasite that can attack the liver. There was no sign in either beaver. In fact they both looked very healthy.  Romaine moved the fibre optic around and explained the image on the screen as he explored inside the abdominal cavity. Apart from the liver, I remember him pointing out the gall bladder, the bladder, testes and vas deferens. And once he’d had a good look around, he removed the tubes and neatly sewed up the little hole he had made. Before the beaver woke up Roisin put the animal (a heavy one on Sunday) into a sack and weighed him.  22 kilos I think he was. The anaesthetic was then switched off and the beaver put into a carrying cage where he slowly came round.

A few hours later, once he was ready, we all watched as he was re-released close to the point of capture. He swam, slapped the water with his tail, dived and headed straight for a bank burrow to sleep off his experience.  We wondered if he would tell the other beavers later that he had been abducted by aliens. And if so, whether they would believe him.

Much as we would prefer our animals to be left alone, we were happy to have this procedure done as it will help to reassure the government that our beavers are healthy, and in due course, give them some information about their genetics as well.