From wilderness to landcaping to rewilding

Bamff estate has been owned by the Ramsay family since the year 1232, when Neish Ramsay, a doctor, was given the lands of Bamff, Fyal, Kinkeadly and Ardormie, as a reward for saving the life of his patient, King Alexander II of Scotland. He is reputed to have removed a hairball from his stomach in an early successful operation. Local legend tells a longer story involving a magic potion made of a white snake caught at the cave behind the Reekie Linn waterfall.

The present building began as a tower house whose origins are not known for sure but are likely to date to the 13th century. Sir James Ramsay, who collected and edited the charters, states that a “new tower” must have been built between 1580 and 1595 since a charter installs George 11 in the “Manes of Bamff, tour, fortalis, ortcheardes”. But contemporary architectural historians say that the new tower will most likely have been built on the site of the old tower and some of the stonework will date from the original building. It was unusual to move the building unless there was a problem with the site. In the case of Bamff, built on a rock in otherwise low wet ground, the site was well chosen.

The house was altered and extended in the 18th and 19th century. The vaulted ceiling of the original kitchen was cut and the present library was made out of the space above. In 1820 the present dining room was added, as a drawing room, and in 1843 the architect Robert Burn remodelled the house. The area in front of the house was lowered at that time to raise the height of the basement floor and create the present hall. This also involved removing a double external staircase, which had given direct access to the first floor. Elaborate ceilings were added to three of the rooms at that time along with the present main staircase. The spiral staircases at the back, various other offices were added, along and the present kitchen began life as the dining room.

At this time most of the Old Brewhouse was built, incorporating part of an older building. It was used as scullery, larders, brewhouse, dairy and washroom in the days when the estate was partially self sufficient and made its own beer, butter and cheese. Paul’s mother remembers her mother’s claim that the butter at Craighall was never as good as Bella’s butter at Bamff. (Bella was the dairymaid, of course).

Things were changed around quite a bit in the late 1920s: marble fireplaces (probably dating from the Burn alterations) were removed and replaced. Four rooms were added for staff on the east side. The contents of the house have been accumulated by the family over the last 250 years.

During the second world war Bamff House was used by the Women’s Land Army as accommodation for a task force of young women, known as lumberjills, who worked as foresters in the surrounding woodland producing timber for the war effort. One of these women, in her eighties, came to visit the house a few years ago. She had been a secretary in Perth when the war broke out, aged around 22. She had joined the women’s land army and been posted to Bamff where she and the other young women started work in the woods at 7.30 am and worked a ten hour day, cutting down trees without chainsaws and extracting them from woods with ponies. At the end of this long day they would run down to Alyth (3 miles), twice a week, to the dance, with their dancing shoes in a bag, and then change back into gym-shoes and run back up in time to get into the house before the curfew at midnight.* 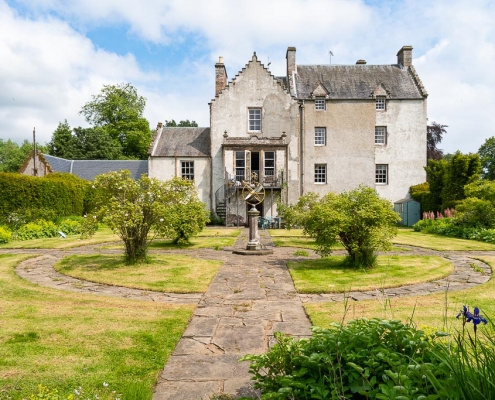 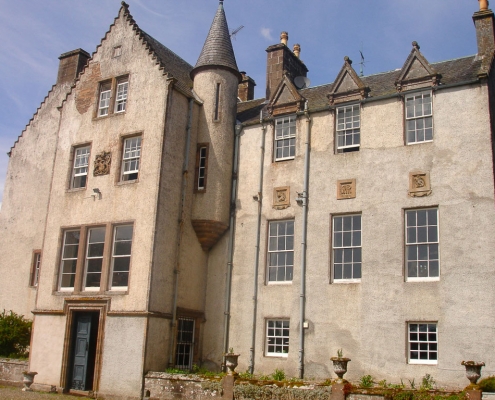 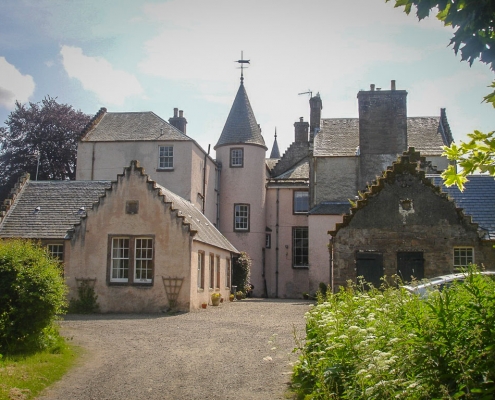 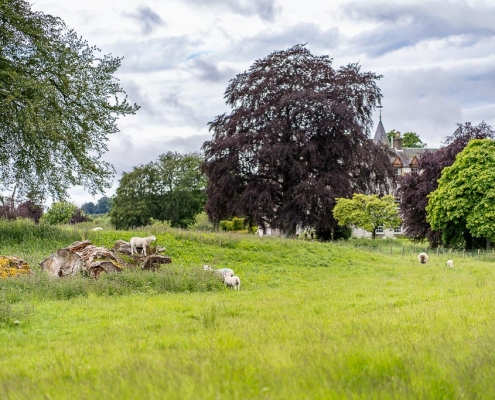 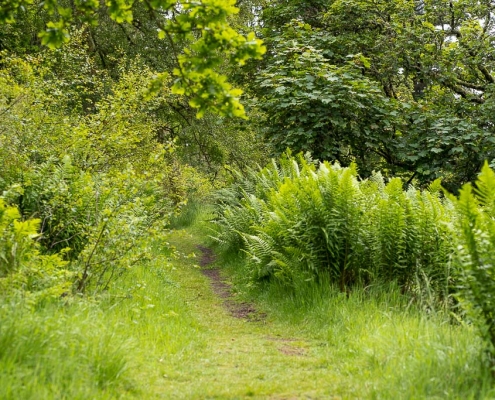 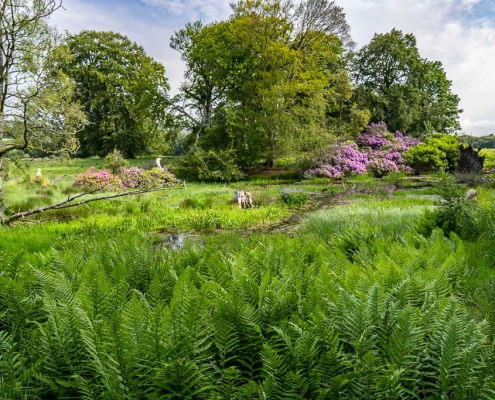 According to the last Lady Ramsay (Leanore) the house was so cold during this phase that snow built up to the second floor in a little courtyard at the back. This was possibly one of the causes of the severe dry rot from which the present owners had to rescue the house in the 1980s. Two rooms were demolished to open up the courtyard and allow air to circulate around the walls and parapet gutters were replaced with external rhones. The repairs and alterations were done under the direction of James Simpson of Simpson & Brown of Edinburgh. They have also made three letting flats out of parts of the house they were not using: two for longer lets and one for holidays.

Bamff has such a strange mixture of trees and plants. Each generation of people has had its own idea of what should be growing here. Once, presumably, it was mainly patchy forest and wet-wood – pine forest on the hill and in the low-ground willow, alder, birch, rowan and hazel; ash too and elm I presume. Probably oak as well and pine in drier parts. There would have been clearance over time, some intentional, some perhaps more accidental – driven by the need for firewood, building material – and prolonged by the grazing of cattle and sheep. But in the 18th century Thomas White, a pupil of Capability Brown was commissioned to design a landscape plan to reimagine the landscape with trees. (He also imagined a ribbon lake. This vision was not realised until we had beavers. Until then reality had given us only a deep ditch. Now the beavers are in charge and creating their version of Thomas White’s lake – a chain of dammed pools.)

Hundreds of beech trees were planted – not all of them in the places White had suggested – and now, nearly 250 years later, they are tall and venerable, with stout trunks and spreading branches. There is a line of them halfway up the hill and there are groups and individuals in the middle of fields and on the edges of woods. The beech trees’ seedlings probably came from England at that time – so although it is thought that beech might not have made its own way to Scotland without human aid there is much debate as to whether it should be defined as native or not. They are certainly very beautiful trees although they do cast a deep shade which prevents most flowers from growing under them. The next phase, in the nineteenth century, was one of exotic conifers from the New World – exciting new kinds of tree discovered in the magnificent primeval forests of North America as they were being opened up for logging. And we have some of these fine trees: Douglas Fir, Wellingtonia, Grand fir, and some huge Sitka spruce, often so tall now that you can identify parts of Bamff from a distance where these giants point up into the sky well above the others in areas of mixed woodland.

A more regrettable 19th century habit was the planting of rhododendrons – often the invasive Rhododendron ponticum, or else more exotic varieties grafted on to ponticum rootstock which have now reverted. These plants are poisonous to eat and are not enjoyed by our native invertebrates or other species. Nothing grows under them either as they cast a deep shade all year round. They grow amazingly well and are hard to get rid of. Even once cut they sprout again vigorously. I spent a little time today with family members breaking off the shiny green leaves that were sprouting from stumps. Luckily for us Dundee Conservation Volunteers have done an amazing job of eliminating them along the Burnieshead path (past the best known set of beaver pools – the ones on the Cateran Trail). And New Caledonian Woodland Volunteers are doing great work with the ones on the drive. Why did our ancestors inflict this problem on us? Well, for 2 reasons – firstly for decoration. They liked the big colourful blooms better than anything our native trees and bushes could produce – and secondly as cover for pheasants for shooting. But tastes change and now, for us, anyway, restoration ecology is the aim and the rhodies are no longer wanted or really considered beautiful in our context.

From the early part of the 20th century forestry became a more commercial business and Norway Spruce, Larch and then Sitka Spruce became the favoured trees, planted not so much for beauty but for timber and thus money. They were planted in lines, and sometimes in square blocks. We tend not to like these plantations very much but they do bring in a bit of money when they are felled, so we are grateful to antecedants for this.

During the 21st century Bamff has been known for its innovative beaver reintroduction project, and the future plans are to rewild a substantial area of the estate with conservation grazing.

Because these cookies are strictly necessary to deliver the website, refuseing them will have impact how our site functions. You always can block or delete cookies by changing your browser settings and force blocking all cookies on this website. But this will always prompt you to accept/refuse cookies when revisiting our site.

We fully respect if you want to refuse cookies but to avoid asking you again and again kindly allow us to store a cookie for that. You are free to opt out any time or opt in for other cookies to get a better experience. If you refuse cookies we will remove all set cookies in our domain.

We provide you with a list of stored cookies on your computer in our domain so you can check what we stored. Due to security reasons we are not able to show or modify cookies from other domains. You can check these in your browser security settings.

These cookies collect information that is used either in aggregate form to help us understand how our website is being used or how effective our marketing campaigns are, or to help us customize our website and application for you in order to enhance your experience.

If you do not want that we track your visit to our site you can disable tracking in your browser here:

We also use different external services like Google Webfonts, Google Maps, and external Video providers. Since these providers may collect personal data like your IP address we allow you to block them here. Please be aware that this might heavily reduce the functionality and appearance of our site. Changes will take effect once you reload the page.

The following cookies are also needed - You can choose if you want to allow them: