The Bamff Beavers, why and how?

Beavers were hunted out in Scotland by the 16th century and the Eurasian beaver was almost wiped out altogether across the continent by the beginning of the 20th century.  After successful beaver reintroductions all over mainland Europe conservation organisations in the UK began to discuss bringing the beaver back in the 1990s. However, consultation led to disagreement and delay over years so some environmentalists decided to start a number of private demonstration projects in large enclosures.  The first of these took place here at Bamff  in 2002 when Paul and Louise Ramsay brought in two Norwegian beavers. Later two Polish beavers and a number of Bavarian beavers arrived.There were some mortalities in the early years and establishing breeding was a struggle at first.

Two families, kept for some years in a very large enclosure, have been breeding now since 2005 and 2006 respectively, and created a third family. They have made a significant impact on the Bamff landscape, converting a ditch into a series of ponds and swamps by building a series of fine dams.  Many wetland species have benefited from this new habitat, including otters and water voles, herons and ducks, as well myriad of invertebrates and amphibians.  Trees felled and drowned by beavers also offer habitat to many species of fungus, insect and bird, such as owls and woodpeckers.  Watching the transformation of the landscape and ecology has been a great source of interest to people visiting and living at Bamff over the years.

As the years have gone by  the beavers have extended their territory, creating an extraordinary landscape of wetlands in between the fields and woods, naturalising the ditch than runs through the low ground of the estate with dams & pools, braids  & meanders.  Kits have been seen every year since 2007 and many people come from all over the country to see this fascinating project – either to sit by the pond on a summer evening to watch beavers themselves, or to walk round the dams and pools and admire their work.  There are now about 40 dams and as many pools.  The Bamff beavers have provided data for many pieces of academic study, including  PhDs, MScs, undergraduate dissertations and school projects. The Bamff beavers and their habitat have become a great draw for wildlife photographers and film makers such as Charlie Nash, Dave Maric and Russell Savory. 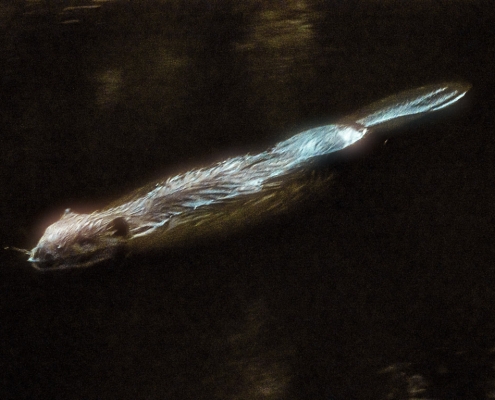 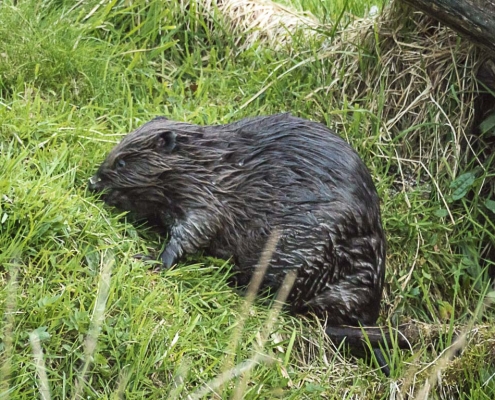 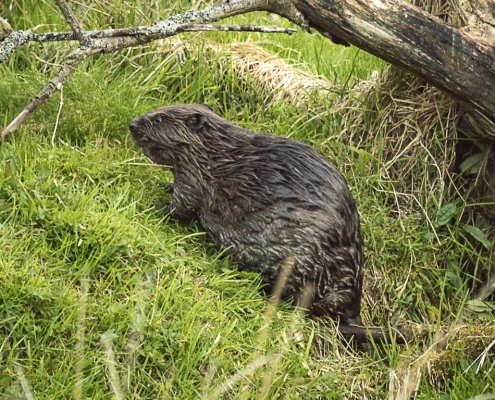 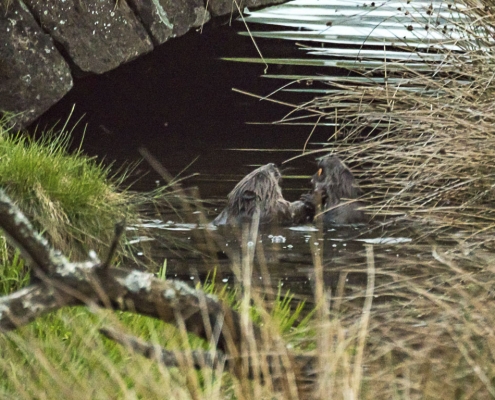 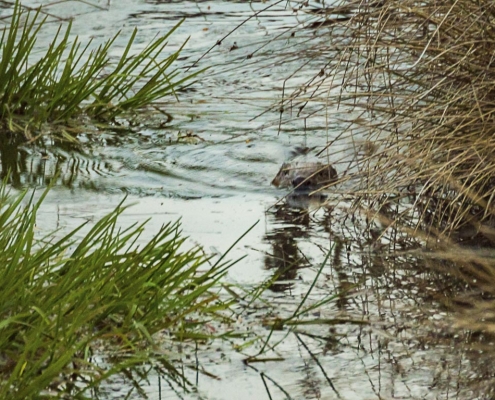 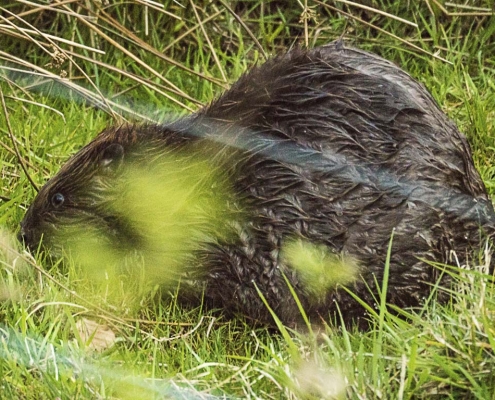 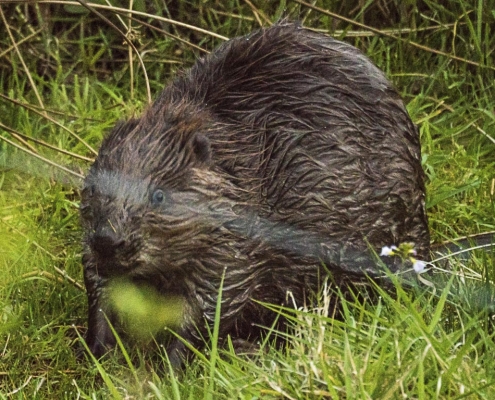 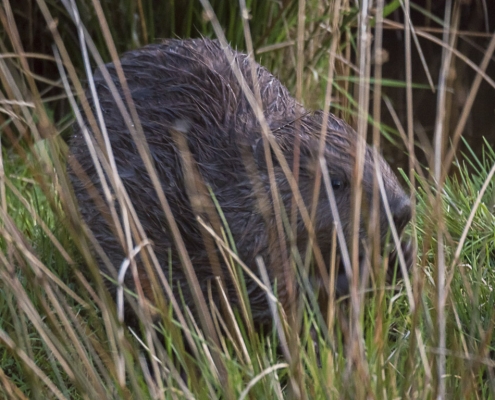 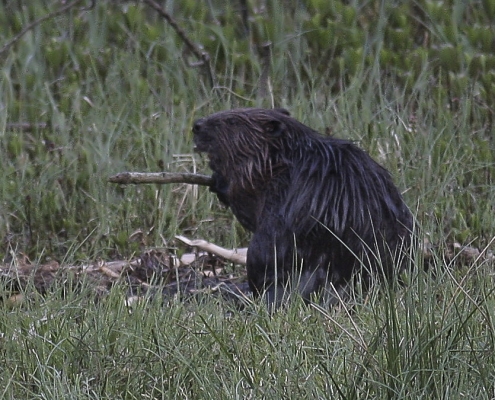 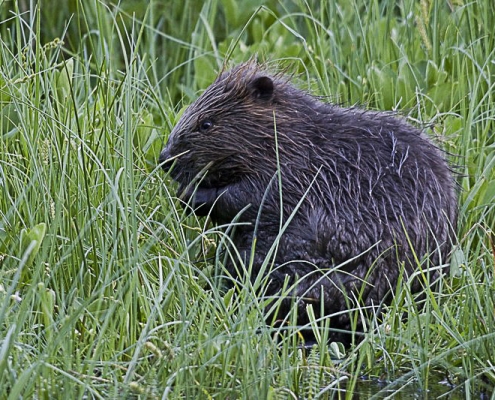 Beavers are semi-aquatic rodents. There are two species – the Eurasian and the North American which cannot interbreed but display similar characteristics and behaviours. They are excellent swimmers and divers, can swim underwater for ½ mile, and hold their breath for up to 15 minutes. Beavers are best known for their natural trait of building dams in rivers and streams, and building their homes (known as beaver lodges)by the resulting pond. They are the second-largest rodent in the world.

Beavers always work at night carrying mud and stones with their fore-paws and timber between their teeth. The largest known dam was discovered by satellite imagery in Northern Alberta in 2007, approximately 850 meters (2,790ft) long. Dam building is extremely beneficial in restoring wetlands and providing habitat for many rare and common species.

The ponds created by well-maintained dams help protect the entrance of the beavers’ lodge from predators. The lodge is also created from severed branches and mud. The beavers cover their lodges  with fresh mud every autumn, which freezes when the frost sets in. The mud becomes almost as hard as stone. The lodge  has underwater entrances to make entry nearly impossible for any other animal. Contrary to popular belief, beavers create the entrance after they finish building the dam and lodge structure. There are typically two chambers within the lodge, one for drying off after exiting the water, and another, drier one where the family actually lives.

Beavers usually live in family groups. As many as 12 beavers may make up a family, but generally there are 6 or fewer. The group includes the adult male and female, the young born the year before, and the newborn. A female beaver carries her young inside her body for about three months before they are born. She has two to four babies at a time. Most young beavers, called kits or pups, are born in April or May. Beavers live as long as 12 years.

Beavers eat the inner bark, twigs, leaves, and roots of trees and shrubs. Poplar trees, especially aspens, cottonwoods, and willow trees are among their favorites. They also eat water plants, and especially like the roots and tender sprouts of water lilies. Beavers store food for winter use. They anchor branches and logs in a cache under the water near their lodges. In winter, they swim under the ice and eat the bark.

Campaign to Save the Tay Beavers

The Ramsays at Bamff were active in the campaign for the Tay Beavers – a population of wild beavers in the catchment of the Tay originating from escapes from enclosures in various parts of the catchment. They were first spotted in 2001. The official estimate in Nov 2012 was 145 and in 2018 a second survey estimated that the number had grown to 450.

The charity that was formed in the course of the campaign – Scottish Wild Beaver Group – works with the Scottish Beaver Forum, the stakeholder committee chaired by SNH which brings together the various organisation with an interest in beavers in Scotland. On 1st May 2019 beavers were given European Protected Status under Scottish law.